On December 15, 2021, PALFINGER and SANY HEAVY INDUSTRIES signed an agreement on the reversal of the cross-shareholding. This substantially increases PALFINGER’s strategic scope.

“Following years of constructive and successful cooperation on the operational joint ventures, the cross-holding is no longer necessary,” says Andreas Klauser, CEO of PALFINGER AG. “In addition, the complexity of our partnership is reduced.” The operational cooperation with SANY will be further expanded on the basis of the good sales structure and access to the Chinese construction industry.

To implement reversal of the cross-holding a closing price of the PALFINGER share of at least EUR 34.68 is required by December 31, 2023. Completion of the transaction will have a positive effect on PALFINGER’s earnings of at least EUR 12 million.

Additionally, this restructuring of the cooperation between PALFINGER and SANY will allow the companies to react even better and more efficiently to the volatile market conditions.

In China and the CIS states, the successful joint ventures will be further intensified. “The joint venture in China continues to show great potential and will be expanded,” says Andreas Klauser.

Since 2012, SANY has been a strong partner for PALFINGER in the development of the Chinese market. The cooperation makes it possible to draw on SANY’s resources, know-how, manpower and sales network. Since early 2014, production has been based in Rudong in the industrial zone near Shanghai where the workforce currently numbers 400 and turnover is around EUR 80 million. “This success is shown by the fact that PALFINGER is now no. 2 and the only European company with a relevant share in the crane market in China,” adds Andreas Klauser. “This year, over 4,000 cranes have already been produced at this site. That means we have already surpassed our targets by 10 percent.”

The reversal of the cross-holding that has been agreed represents another important step toward significantly increasing PALFINGER’s headroom for potential acquisitions and investment and assuring continued growth. 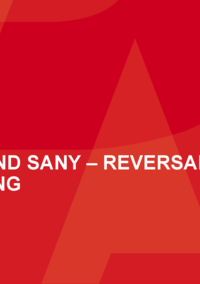 PALFINGER and SANY - Reversal of cross-shareholding

The international mechanical engineering firm of PALFINGER is the global leader for innovative crane and lifting solutions. With a workforce of over 11,600, 34 manufacturing sites and a worldwide network of dealerships and maintenance centers at over 5,000 locations, PALFINGER is always close to the customer.

As the leader in its engineering field, the company aims to ensure its partners’ business success in the long term by providing solutions and products that remain economically and ecologically viable in the future. Its broad product and model portfolio allows PALFINGER to take digitalization and the deployment of artificial intelligence to new levels.

As a global company with strong roots in its home region, PALFINGER is convinced that thinking and acting in the interests of sustainability plays a vital role in successful business operations. This is why the company assumes social, ecological and economic responsibility along the entire value chain.

PALFINGER AG has been listed on the Vienna stock exchange since 1999 and in 2020 achieved a revenue of EUR 1.53 billion.